Back to all posts

How To Read A Chord Chart

How To Read A Chord Chart

A chord chart is a guide to the harmony (chord sequence) of a song.  It will hopefully give you the ‘geography’ of the song to whether that be verse, chorus, bridge, etc. or an A B A A form for example.

You will come across different versions of chord charts from nicely printed sheets to a few hastily scribbled out chords.  Half the skill of reading a chord chart is actually deciphering it, well it is for the bad ones anyway!

In the video lesson, I show you how to read a well printed chart and a more basic handwritten part.

In these chord charts we are given the chords instead of just the written notes.  We are also given an idea of the bassline by the written part in the first measure but we then have to use our knowledge of the song, and style, to try to play an appropriate bassline.  As there is less information on these charts than a on chart with a full transcription, it is handy to have some prior knowledge of the song if our intention is to play a similar bassline to the original one.

Once you can play the bass line pattern in Measure 1, you can then transfer this same pattern to the A and B7 chord starting on either an A in the root or a B in a root depending on the chord.

Below, I will highlight some of the musical symbols on the chart for you. 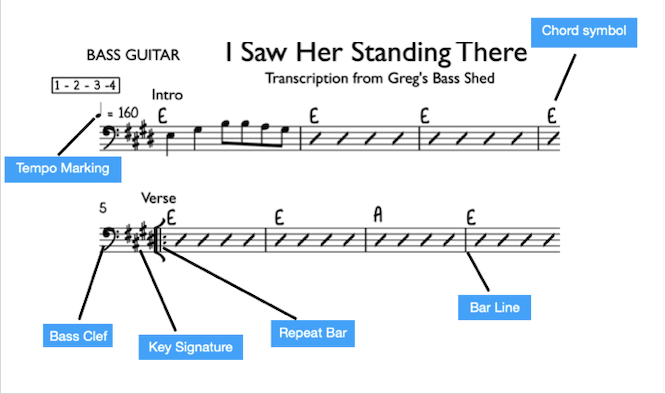 Note the Slash Chord which is in measure 14.  It is written like this: E/G# - play G# in the Bass

A slash chord will have another note other than the root in the bass.  In this case G# is the 3rd of an E chord.  When you build a chord on the 3rd note then this is a ‘1st inversion’.

While you play the G#, the harmony instruments (generally guitars or keyboards) will play the E chord on top.

Tip for Reading Chord Chart by Ethan Austin of 10monster.com

"The grid of six vertical and five horizontal lines represents the guitar fretboard. If you’re having trouble understanding the basic layout of the image above, hold your guitar in front of you so that the strings are facing you and the headstock is pointing up. The image of the guitar chord chart represents this same view of your guitar, with strings running vertically and frets horizontally."